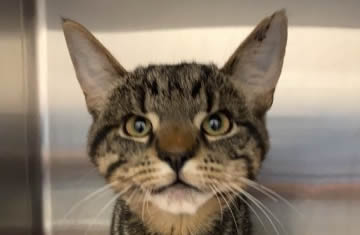 The story of a little injured tabby cat

The animals we typically deal with are sick or injured.  Some really have been in the wars and Ozzie the cat is just one example.  He was the victim of a RTC (Road traffic collision). He injured his foot which required staples but worse still, he had broken his jaw.  You can see from the photo the swelling to his face.  Insp Dave McAdam collected Ozzie after the national control centre took a few calls from concerned members of the public.  The next step was getting this lovely little cat the veterinary treatment he needed so urgently.

That is where we come in.  As a local Branch, we are here to support Inspectors and raise money for local animals.   The donations we receive allow us to fund treatments and operations just like Ozzie’s.  The vet  waited for the swelling to go down before Ozzie’s jaw rewiring could go ahead.  You will be pleased to hear, all went well.  However, since his operation and foot treatment, the little monkey did manage to to remove his buster collar and pull the staples in his foot! He is doing brilliantly now though and that is thanks to donations given by people like you! Ozzie will now go on to the RSPCA Radcliffe Animal Centre to recuperate fully and if not reclaimed, be adopted.

The RSPCA has many factions.  From branches like us who cover our own areas, to the Inspectorate who are frontline,  trusts like RSPCA Radcliffe Animal Centre and the National Society whose umbrella we all come under.  We are all vital in helping vulnerable animals and you can assist with that by donating to allow us to continue to be here for the Ozzie’s of Nottingham.