Here for Nottingham’s animals since 1875

Home All Here for Nottingham’s animals since 1875

The SPCA (as the national charity was known then) was founded in 1824 in a coffee shop in London. Royal patronage was followed in 1837 and in 1840, Queen Victoria gave her permission to add the R to our acronym. In 1875, this branch, RSPCA Nottingham and Notts, was founded.  Unfortunately, don’t have a lot of information regarding the who and where but we do know the branch moved to 137 Radford Road approximately 100 years later and we are still a respected presence in Hyson Green.

Branches work under guidelines from the national society but are separately registered charities.  We operate at a local level and our aim is and always has been to support Inspectors in whatever way needed.  Each branch is self-funding, with their own ‘area’.  Governance is through a group of volunteer trustees and as a committee they are responsible for our finances and how the branch operates along with management.  We have always been very proactive and we assist with animal transport, sometimes even rescues, provide financial help for neutering and fundraise via our shops.

Until 2010, branch housed animals on premises.  Our cattery and small animal unit closed when new licensing meant it was no longer viable to have animals at Radford Road through lack of space to comply to changes.  However, we moved forward and adapted, something we have done many times over the years.  From the mid 1970’s until Oct 2010 the small but very busy animal unit at Hyson Green rehomed thousands of animals, an achievement of which we are very proud.  Countless wild animals and birds were rehabilitated and released through branch too.

Ultimately, all we have and all we continue to do is for animals living in our Nottingham and Notts branch area and we couldn’t continue without the generosity of the public.  2020 has been probably the most challenging year in our recent history.  Support from people like you means we can help vulnerable animals by providing medical care, warm housing and a safe refuge when they have no-one else.

If you can help us with a donation we would be so grateful.

We have been here for 145 years and we hope to be around for many more. 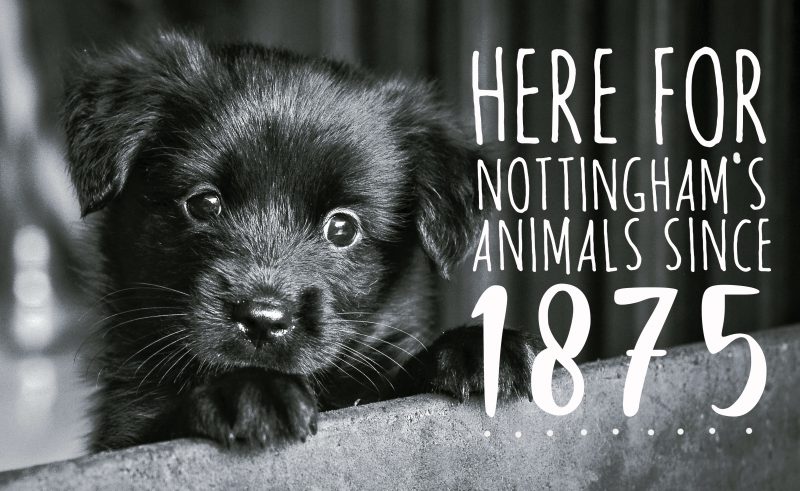